South Sudan’s civil war has taken a toll on the country’s education system. With a new peace agreement now in place, GPE continues to support the government to bring children back to school and provide them a quality education.

South Sudan - the newest nation in the world – has an estimated 7 million citizens requiring humanitarian assistance (out of 12.5 million people), and over two million have already fled to neighboring countries as refugees as a result of years of conflict. 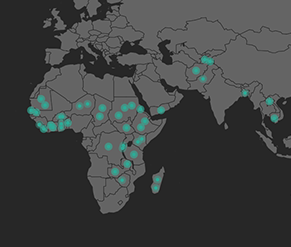 The legacy of civil war combined with the cumulative effects of years of conflict, political instability and extreme poverty, eroded earlier gains in access to education.

At least 2.2 million South Sudanese children were estimated to be out of school in 2018. The vast majority of these children are girls, child soldiers, children with disabilities, and children who are just too hungry, too busy working to help their families, or too afraid of the journey to school.

South Sudan’s population is among the youngest in the world - which puts an additional strain on the already stretched education system, characterized by weak and under-resourced national systems.

School life expectancy in South Sudan is among the lowest in the world - on average, a child can expect to receive a total of five years of education.

There is also a shortage of textbooks: 3 students share one textbook for both English and math - far from the policy of 1 textbook per student.

GPE stood by South Sudan in times of crisis

South Sudan has been a GPE partner country since 2012. However, outbreaks of conflict in 2013 and 2016 hampered the implementation of the General Education Sector Strategy covering the period 2012-2017. The GPE-funded program had to stop operating for a while before the program could be restructured to address the needs emerging from the conflict.

In 2015, GPE gave South Sudan a grant to support the development of the GESP which responds to the challenges identified in the education analysis. Aptly subtitled "Planning for Safety, Resilience and Social Cohesion", the new plan envisions to bring out-of-school children into schools, harmonize teacher training courses, introduce a new curriculum and a set of textbooks aligned to the curriculum.

Several partners were involved in developing the GESP including humanitarian actors, NGOs and civil society organizations, along with teachers and a few ministries.

This inclusive process – spearheaded by GPE - contributed to building a common vision for the education sector while promoting a coordinated sector dialogue and a better planning process.

Bridging the gap between humanitarian needs and development

GPE allocated an implementation grant of US$36.1 million to South Sudan for 2013-2018 to fund activities outlined in the education plan. While the program was conceptualized when South Sudan was relatively peaceful, it was implemented in an extremely challenging context characterized by the outbreak of the civil war and the protracted conflict that followed.

During this complex time, GPE was considered among the most stable and aligned partners in the country. While most donors moved to humanitarian funding, GPE continued to support development activities aligned to the education plan - providing the Ministry of Education with much needed stability and predictability.

The GPE program laid important foundations for the future improvement of the quality of education in the country. These included the development of a gender-responsive national curriculum for all subjects, from early childhood through secondary education, as well as teaching and learning materials aligned to the new program.

Additionally, GPE supported an out-of-school children study, which helped identify who these children were, while unpacking the major barriers hindering school participation and mapping existing strategies to tackle the issues.

25 primary schools - capable of accommodating 10,000 students - were constructed and a girls’ education strategy was designed to improve gender equality.

Furthermore, GPE provided US$6 million under the accelerated funding facility for countries facing urgent needs of funding to continue with critical functions of the education sector in collaboration with other development and humanitarian partners.

Interventions target displaced and vulnerable children and aim to improve the quality of education through the professional development of teachers, the provision of relevant, local language learning materials, and strengthening education management systems, among other activities.

February 06, 2023 by GPE Secretariat | 1 comment
GPE at CIES 2023: What’s on our agenda?
The 2023 Comparative and International Education Society (CIES) conference is an opportunity for us to reaffirm our commitment to transform education for a more equitable world and show some aspects of what...
February 01, 2023 by Anna-Maria Tammi, and Carly Munnelly
Climate change is threatening education financing: We are launching a joint effort to identify trends and solutions
Save the Children, the Global Partnership for Education (GPE) and other partners are teaming up to better understand and further the global discourse around the relationship between climate change and...
January 31, 2023 by Katy Bullard, and Giovanni Zino
How are GPE partner countries assessing teaching quality?
Assessing the quality of teaching helps diagnose and inform the partnership on priorities for teaching practice, institutional support and policy design for more effective teaching.
END_OF_DOCUMENT_TOKEN_TO_BE_REPLACED